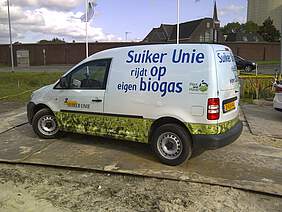 In early 2011 construction has started for the first digestion plant for residues of sugar and vegetable processing that Krieg & Fischer Ingenieure GmbH has designed and engineered for Suiker Unie in Dinteloord/ The Netherlands. While this digestion plant is almost completed and biological start-up has begun, Suiker Unie has ordered KF to conduct two similar projects for large industrial digestion plants – one in the Netherlands and one in Germany.The project in the Netherlands will be conducted on behalf of Suiker Unie Green Energy at the production site in Vierverlaten. Annually a total amount of 116,000 t of residues from sugar production and potato processing will be digested to approx. 17 Mio. cubic meters of biogas. The biogas will be purified and upgraded to biomethane before it will be injected into the natural gas grid. Upon completion of the Vierverlaten plant, Suiker Unie Green Energy will be the Netherland’s largest biomethane producer. A part of the biomethane produced will also be used to fuel Suiker Unie’s own fleet of vehicles (see picture).

to top of page |   Print version

This website uses cookies. Those have two functions: On the one hand they are providing basic functionality for this website. On the other hand they allow us to improve our content for you by saving and analyzing anonymized user data. You can redraw your consent to using these cookies at any time. Find more information regarding cookies on our Data Protection Declaration and regarding us on the Imprint.