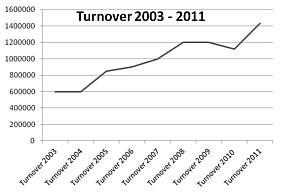 Based on its good order situation the German engineering firm for anaerobic digestion plants Krieg & Fischer Ingenieure GmbH has every reason to be optimistic about its performance in 2012. This assessment is in stark contrast to the generally negative tendency of the national biogas sector. Krieg & Fischer benefits particularly from its long-term activities on the interna-tional scene and especially from its activities in Europe and China. A Finnish company, for example, awarded Krieg & Fischer the contract to engineer an anaer-obic digestion plant for the treatment of 32,000 Mg/a of source separated organic household waste. The engineering firm has already been involved in developing and comparing several options for pre-treating and digesting the waste as the basis for the client’s decision making. After the client selected the option of choice Krieg & Fischer started detailed engineering in January 2012. Construction is expected to begin in mid-2013. Additionally six digestion plants with a total capacity of approx. 17 MWel are under construction throughout Europe. Furthermore Krieg & Fischer is currently starting-up three plants with a total capacity of 7 MWel. Construction sites are located in Germany, the Netherlands, Spain, France and Russia. Within this year additional construction sites will start in Italy, Serbia and Bulgaria. The variety of feedstock for the digestion plants ranges from energy crops and manure, to residues from sugar and food production up to slaughterhouse waste.In China Krieg & Fischer mainly works as a consulting firm to strengthen the performance and the capacity of local engineering firms. So far seven projects of different sizes – varying be-tween 300 kWel and 3 MWel – have been supported in detail. More projects will be coming up.Since the beginning of 2012 five additional engineers have been employed to support the in-ternational team and to enable the firm to successfully handle all projects. Krieg & Fischer now has a team of more than 25 employees.

to top of page |   Print version

This website uses cookies. Those have two functions: On the one hand they are providing basic functionality for this website. On the other hand they allow us to improve our content for you by saving and analyzing anonymized user data. You can redraw your consent to using these cookies at any time. Find more information regarding cookies on our Data Protection Declaration and regarding us on the Imprint.